MINNEAPOLIS—An independent research commission has released the results of a new in-depth study that indicates that Deb is only the third strictest cashier in Dining Service. 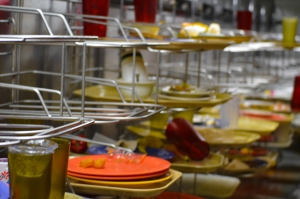 “Coming into these experiments, Deb’s reputation preceded her,” O’Rourke says. “It made the survey’s findings all the more shocking.” The survey also consisted of a section that tracked how often each cashier sneakily typed in that one extra item after they took your ID card.

When asked who she thought was the strictest cashier, co-worker Corky Biehn said, “Yeah, when the rubber really hits the road, Deb definitely doesn’t take the cake. I’d say there’s, you know, one, maybe even two cashiers who beat her out. Now I’ve got no data to back that up, but I for one definitely overcharge the hell out of students on the vegan and gluten-free specials. Takes a lot of time and effort to take all that gluten out, and somebody’s gotta pay for it.”

The survey indicates that Jan is, empirically, the strictest caf lady on campus. “From a purely objective, numerical standpoint, it’s safe to say that Jan goes balls to the wall when it comes to enacting swift card-swiping justice and hawkishly monitoring munchie miscreants,” O’Rourke commented. “She won’t let you out of her sight until she’s checked under your plate for hidden cookies or searched your jacket for that tea bag you pocketed. Nothing gets by her.”

At press time, Jan was last seen insisting that a student open up his deli wrap to make sure there were no Powerade bottles hidden inside.