FLASHBACK: What Was That Whole Divest-Fest Thing About?

In the interest of preserving and celebrating our illustrious history of over 150 years, The Fourth Crown presents the fourth of a 2,928,608 part series, FLASHBACK, chronicling the most important events in Gustavus Adolphus College’s history.

Our fourth installment looks back to 2014’s Divest-Fest, a student-organized display that has since been mostly forgotten, and now dwells only in the deepest annals of Facebook photo albums. What happened at this event? Scholars have not been able to agree since the rally, which took place over six days ago. The historical community has come to a consensus the event’s origins lie in the college’s divestment movement, which advocated an end to the institution’s investments in fossil fuel industries. However, the scholastic community has posited Divest-Fest became saturated with a wide variety of disconnected campus movements, rendering the event into an ambiguous, but significant, display of collegiate activism. Consequently, we can only surmise what happened that day, with there being five main schools of thought.

SCHOOL ONE – Anti-Fossil Movement: Professor of Political Science Andre Thurman contends that the rally was strongly against the concept of fossils, and of dinosaurs altogether. Thurman writes, “I vividly remember the students congregating about how the world was created 4000 years ago, rendering fossils and dinosaurs as myths deceptively created by the liberal media.”

SCHOOL TWO – Anti-Vest Movement: While the Anti-Fossil Movement remains the most widely believed school of thought, a growing group of dissenters champion the theory that Divest-Fest was an attempt to rid the school of the vest, a garment without sleeves or a collar. School historian Anna Isringhausen argues, “The near absence of students wearing vests on campus can be directly attributed to Divest-Fest, which happened to occur in late-April on a warm, sunny, spring day.”

SCHOOL THREE – Orange Is the New Black Guerrilla Advertising: With the rising influence of online streaming services, several cultural theorists believe to have pinpointed Netflix’s new strategy to promote the second season of its smash hit, Orange Is the New Black. Media scholar Yusef Abdul explains that the movement, marked with the colors orange and black, are “clearly Netflix’s brazen attempt to counter its rivals by seizing the all-powerful 18-49 demographic.” 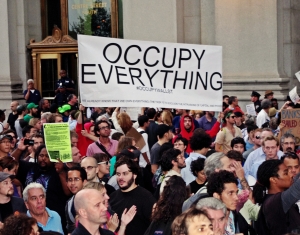 An image commonly attributed to the Divest-Fest of April, 2014.

SCHOOL FOUR – Aggressive Anti-Oil Protest: Some geological economists argue that the rally was an aggressive effort to eliminate the world’s oil supply in one fell swoop. Industry expert Brad Copperfield posits, “Their use of crude oil to paint the black on their signs is indicative of the movement’s desire to dry up every oil well in the world. What kind of activism works best? The kind where people act…and the ones that use up every single drop of the world’s most valuable resource.”

SCHOOL FIVE – Anti-Movement Movement: With all of the opposing viewpoints on the rally, the final group theorizes that the event’s scattered focus was an intentional effort to act against the idea of a movement altogether by inviting anyone with a complaint to join in on the activism, effectively distracting from the original message similar to the famed Occupy movement. Philosophy Professor Eileen Matthews offers, “In order to gain press like Occupy, we believe that Divest-Fest was created to offer a platform for all Gusties to speak out for what they believe, consequently—and intentionally—mushing their voices together into a less coherent rabble.”