SAINT PETER—Sensing weakness in the ever-transparent Gustavus Adolphus College, King Gustav II Adolf of Sweden has initiated an aggressive siege, fully equipped with cutting edge military technology (by 17th century standards). “The Golden King” had reportedly sensed disruption in power due to the popular hashtag #OurGustavus and has since claimed Nobel Hall and Sesquicentennial Plaza. 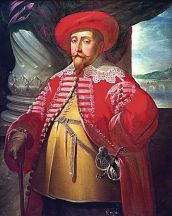 The 17th century monarch’s critics include Professor Shawn Korne, whose lecture on 19th century abolitionist rhetoric was cut short following his decapitation at the hands of an elite Swedish cavalry unit.

In a statement issued before the United Nations Security Council, the Lion of the North claimed “I have returned to lay claim to the school of my name, armed with the Justice of my Christ in my left hand and the Countenance of my Protestant God in my right. Popery has long laid siege on the children of my children. LONG LIVE MY KINGDOM, #MYGUSTAVUS.” Following the emotionally charged speech, the UN Security Council denounced the Swedish Empire, citing his “conquest of a small, private, liberal arts college in Minnesota” as “an act of barbarism unseen since the Protestant King eliminated scores of Catholics at the Battle of Breitenfield.”

Many faculty members and administrators have voiced their concerns with the 17th century monarch for disrupting the rhythm of campus life. In an exacerbated string of tweets late Tuesday night, Director of Residential Life Chuck Pann lamented the fact that CFs have been forced to deal with “trebuchets and forced baptism” rather than “underaged drinking and relationship issues.”