NEW YORK— This past Sunday, September 21, six members of the Gustavus Greens, an environmental justice organization, joined 400,000 people from across the United States at the People’s Climate March in New York City, NY. The six students’ fiery passion for climate justice and need for immediate action were tempered with a 24 hour bus trip to New York. On the return journey, however, the energized Greens chose to divest themselves from fossil fuel transportations by walking home from NYC. As of Friday morning, the students were approximately ten miles into the state of Pennsylvania.

The Greens, who are still currently operating under intense FBI scrutiny for their ganglike activity, are known for strange past behaviors, including living in arboretum trees to prevent them from being cut down, keeping bee hives and compost bins in their dorms, refusing to print out class materials, and chasing after people using Gustie ware. The People’s March protest crowd, which was described by one eyewitness as “aged hippies, anarchists, and the unshaven,” was a logical home for the Greens contingency.

It was not until a refueling stop when the Greens decided to make the change. “We were getting gas when the realization hit us,” said one student, reached via a pay phone in Stroudsburg, PA on Thursday afternoon. “We had been so excited to get to the march, we didn’t even realize that, by making the decision to take a coach bus, we were going against our very own morals, and spewing out catastrophic gas emissions into the air.”

The student described the whole bus as erupting into tears, as protestors attempted to protest against themselves. 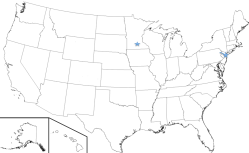 This map of the United States outlines the six Greens’ progress across the country thus far.

“It just felt so wrong,” said another student. “Here we all were, on our way to the biggest climate march in history, and we were adding to the carbon levels in the atmosphere. As usual, we decided to paint some signs to protest, but instead of oil companies or politicians, we were picketing ourselves. Have you ever attempted to write slogans which both inspire you and attack you as a human being? It’s hell. A mirror would have helped.”

One student was described as continually “existentially vomiting” as he ripped every piece of oil-derived plastic from his wallet, iPhone 5s, MacBook Pro, and backpack.

The six Greens agreed the best course of action was to “walk back from NYC to prevent guzzling any more of our planet’s precious resources.” This decision also includes avoiding the use of any manmade roadway and preventing any use of unnecessary oxygen.

It is unlikely the Greens will return before the rest of the planet finally gets around to destroying the climate once and for all, an event which is projected to occur in mid-November 2014.