MENLO PARK, CA— A new report issued by Facebook’s analytics team indicates that the language used by mothers in Facebook posts and comments bears remarkable similarities to the English language. The study, commissioned as part of a Facebook sociolinguistic research initiative, reveals that the combination of incorrectly capitalized latin characters, out of order verbs, and lack of punctuation used by moms is in fact directly related to English.

“At first, the phrases and characters being inputted to Facebook by moms were nearly unrecognizable,” said linguistic researcher Melanie Rustico. “Reading things like ‘Miss you dad says hi good luck tomorrows exam’ and ‘Looks like the fun weekend seems you having good time call me sometime’ originally struck us as incomprehensible. But after further research we ascertained that these poorly strung together sentences were written in a close variant of English.”

The research has been hailed as “groundbreaking,” “astonishing,” and “vaguely comforting” by the scientific community. “This new dialect was daunting to crack,” said research assistant Pascal Jones. “Oftentimes the language used by middle-aged female Facebook users adheres to no grammatical conventions at all, which makes it very difficult to understand. For example, there were no consistent uses of the Oxford comma among our sampled subjects. In fact, there was no use of any commas at all.”

Jones explained that with no structural similarities on which to base the research, teams of interns had to comb through each post individually to decode the written communication method into an understandable version of English. “Sometimes it is something as simple as ‘Can’t wait to see tomrrow at the theatre Cats what time is the best arrive?’ but other times we may have to decrypt a home remedy for warts that is intermixed with Google Maps coordinates for the Olive Garden.”

Rustico confirms that the vast majority of people using this unfamiliar dialect were mothers, due to the fact that most fathers “don’t give a rat’s ass about social media.” Despite the challenges, Rustico remains optimistic for the road ahead. “Who knows, in the future maybe it will be possible to return communication with mothers on social media, or even teach this new dialect to our youth.” Rustico says the latter could definitely be a viable option, as the newly discovered language only requires the user to stop giving a shit about grammatical conventions. 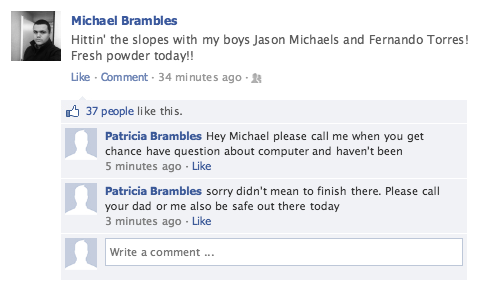