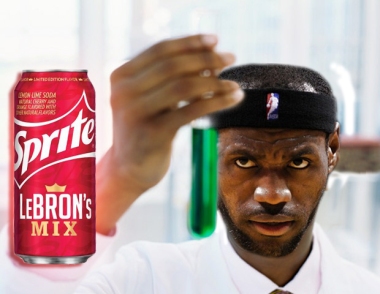 At right, a laser-focused James in the late stages of R&D for his patented Sprite mix. Superimposed at left is the can design for LeBron’s Mix. Each can is hand-formed and painted by James.

ATLANTA, GA— In his 16th consecutive all-night session of chemical engineering, NBA star LeBron James discovered the perfect level of sodium benzoate relative to citric acid and sodium citrate for industrial batches of his patented “LeBron’s Mix” special edition Sprite. The major victory for James’ scientific career comes hours after the Cleveland Cavaliers fell to the Golden State Warriors in the 2015 NBA Finals series, and has been instrumental in reaffirming the nation’s faith that James is, in fact, infallible.

The two-time NBA champion and four-time league MVP turned to food science after becoming bored with the state of basketball. “Before most games, I down a bottle of sleeping pills just so I have a challenge during the first half. The game got dull, particularly when you’re essentially playing 1-on-5 night after night. Now, I’m taking my talents to Atlanta, at the research headquarters of the Coca-Cola Companies,” announced James in a press conference in late May. While winning his third NBA Finals title would have been an “ok” way to spend a Tuesday night, James claims athletic victory has lost its thrill after 30 years of nonstop domination.

Sources close to the Cleveland Cavaliers franchise are also reporting that James has attempted on many occasions to infect himself with a strain of the influenza virus as part of a generational rivalry with Michael Jordan, who famously played ill in the 1997 NBA Finals. “Let’s see MJ concoct a sick drink like this,” James said.

Despite lacking the PhD typically required to engineer mass-appealing soft beverages, let alone any degree from an accredited university, James quickly proved himself a natural talent who does not require further academic cultivation of his skills. This mirrors his earlier success as a youth basketball star, when he received a $5.2 million dollar contract from the Cleveland Cavaliers for sinking used diaper after used diaper into a trash can eight feet from his crib throughout his first year of life.

James once had a contract with PepsiCo to develop a game-changing soft drink, but after coming close on several occasions, has moved onto Coca-Cola in a highly controversial move in soft drink circles. Experts believe after his successes at Coke, he will return to Pepsi, rebranding himself as a hero for his former company.