AB: This is a beautiful sculpture of a Ringwraith from the Lord of the Rings holding up a baby giant turtle while balancing on half of a unicycle. It’s an artistic representation of the old Swedish myth of Borr, a deity who holds up the world on the back of a baby giant turtle but with a modern twist. On the night of the full moon, Borr likes to wake up and put down the baby turtle so that he can rest his arms.

MJ: Can someone say bargain? It is a little known fact that this statue was made from the melting of 8406 chocolate gold coins. In total, the sculpture cost about $700, which is equal to one bagel with cream cheese in the caf. It seems to communicate a sense of false hope. A young elf holds an empty bowl to the sky, mindlessly praying to the International Space Station. Let me tell you something, no matter how hard you pray you will never be struck down by a meteor. 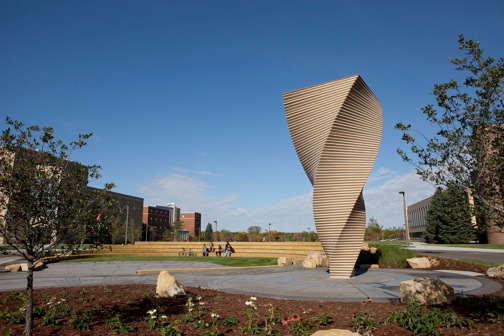 AB: This is a monument dedicated to the wind god Aeolus which was built because he came through and ransacked the campus and destroyed our temple/chapel after he found out it was not made to honor him specifically.  This monument is the only thing keeping the chaos out.

MJ: The first time I saw this, someone threw up next to me.

EJ: Some say a tornado. Others say a phallus. I say, “why not both?”

VDH: The Great Sharknado of 1969 was a rough time for the Gustavus Campus. This sculpture serves the same purpose as a scarecrow would. It wards off any future sharknadoes or air funnels full of any sort of aquatic animal.

AB: This is a sculpture of the letters, “ABCD,” drastically misspelling the word, “Library.” Despite the glaring error, this really is a nice contribution to the campus environment.

MJ: Students typically spin this sculpture to alter the position of the sun. Yet, this makes little sense as the letters actually stand for: “All Bananas Can Dangle.”

JT: Hey. I’m Justin Timberlake, longtime fan of the Fourth Crown, and I just wanted to say don’t worry about the haters. They’ll say you’re fake or dumb or that you can’t live up to any of your past success. I know what it’s like. You’ve just gotta keep writing and block out the negativity. That’s how you stay in the game. Also, this sculpture haunts my dreams. Love you, babes. Stay true. 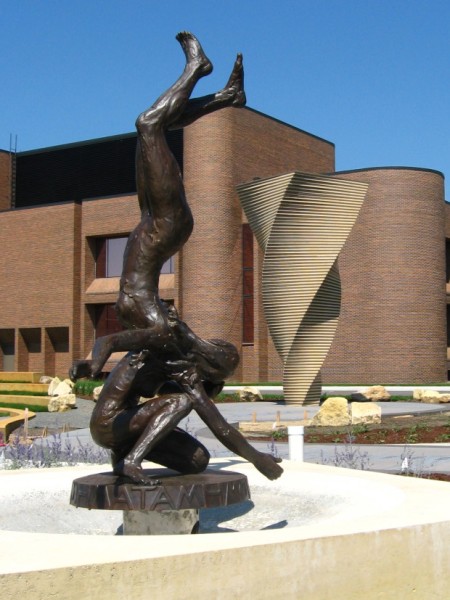 AB: This is a sculpture of a boyfriend who is trying to pray to our lord and savior Jussi Bjorling while his girlfriend, hungry for attention, is trying her best to get him to focus on her instead. This is a particularly pious boy, so after long enough the girl decided to climb on top of him in a truly Cirque Dul Soleil fashion. It is whispered among the scholars that if he ever stops praying a snake will appear and eat them both.

MJ: This sculpture is the physical representation of an ethnography. The artist followed a select group of students as they learned how to drink milk out of each other’s mouth.

EJ: So this is how lesbian sex is done… Huh, interesting.

VDH: This sculpture was made to show how small our library really is. This sculpture is clearly enormous. The top figure’s foot reaches above the library. This piece of art was made as a protest toward Gustavus campus to make a bigger library.

AB: This mustache is actually justice manifested in the physical world. Even looking at this picture is enough to make me want to drop to my knees and beg forgiveness.

MJ: I bet most of you will ignore this but I just wanted to say that I have yet to Faceswap with this thing. I was under the impression that Love Trumps Hate, but I guess I was wrong.

VDH: This is a grossly inaccurate bust of Rebecca Bergman made to honor her presidency here at Gustavus. The sculptor should be ashamed.