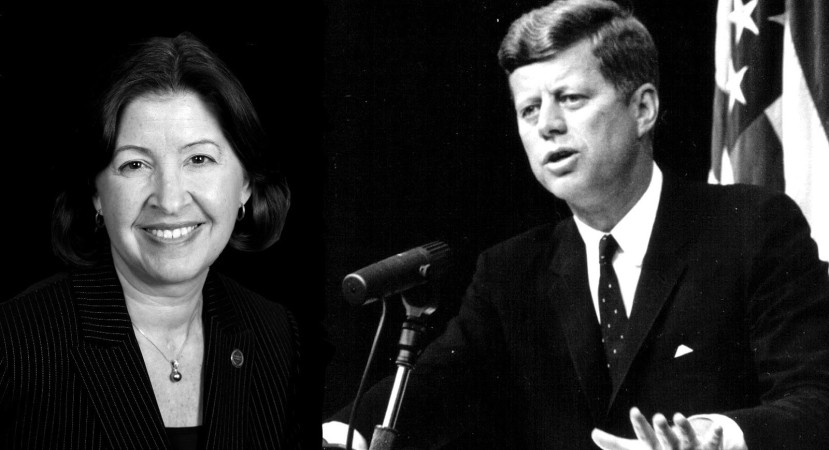 SAINT PETER, MN- Last week the United States government released 2,800 classified documents on the assassination of former President John F. Kennedy. The Fourth Crown has sorted through these files with the diligence of a freshman writing their first major essay at two in the morning. A key piece of evidence that was discovered that will strike Gustavus to the core: the true assassin of the late and great JFK was none other than Gustavus’s own Becky Bergman.

This file describes an interrogation between President Bergman and FBI agents. The conversation starts with a few easy questions, as Bergman was a child when the President was assassinated in 1963. It recounts Bergman’s movements when it became clear that there was a gap in her timeline. After some pressuring the agents were able to coerce a confession out of Bergman. The following is a transcript of the interrogation. This conversation may be upsetting to some readers, so reader discretion is advised.

AGENT: Where were you the day of the President’s assassination.

BERGMAN: Fine, you want to know? I’ll tell you where I was. I was in Dallas and I pulled the trigger, that’s right. I masterminded the operation, not Lee Harvey Oswald, me.

AGENT: But you’re a child, why would you want to kill the President?

BERGMAN: Because only I can be the one true President.

Bergman then used her savvy and charm to sway the FBI into pinning the assassination onto Oswald while she trained and honed her powers to become the President of Gustavus, followed by President of these United States, and finally President of the World. When asked for a comment, Bergman declined to speak with the Fourth Crown, but slid a note to us with a crudely drawn picture of the Fourth Crown newsroom on fire with the words “STOP INVESTIGATING” underneath. Reporters still aren’t quite sure what the note meant, but it adds a nice piece of art for our wall while we continue investigating her connection with the JFK assassination.